Bad Data Visualizations: 3 Mistakes Marketers Make and How To Avoid Them

When you’re working with data, presentation is everything. Bad data visualizations can throw off your entire message. Here’s how to avoid three common mistakes.

It’s true that a picture is worth a thousand words. It’s also true that a powerful visualization can sometimes be worth more than pages of text or spreadsheets of data. Marketers need to remember this when communicating the outcome of their efforts. When reporting data, strong visualization could be your best tool for illustrating the impact of your programs and the return on investment.

Company executives expect marketing teams to deliver insights that can inform business decisions and clearly defined success metrics. Drawing actionable conclusions from a spreadsheet of data can be cumbersome and time consuming. Data visualization can be a useful tool for representing complex information in a digestible form, without overwhelming the audience.

Don’t assume that if you throw all the data into a table or graph the results are obvious. Good communication requires context and your audience probably doesn’t have time, or won’t take the time, to inspect the data. Whatever observation you’d like to highlight, go ahead and spell it out. That means including insights in text format in addition to a graph or table. If using a graph, use callouts for key events. When showing an increase or decrease, calculate that difference for your audience.

Mistake #2: Including too many data points in one graph.

It can be tempting to share all the information at your disposal, but too much data in one visualization obstructs the key takeaways. Ask yourself what your audience cares about the most – campaign goals, KPIs, conversions, etc. – then pare everything else back.

Some data points seem related but aren’t necessarily helpful when comparing performance. For example, sales revenue might have significantly increased year over year, but so did ad spend. In this case, compare apples to apples by including rates, such as return on ad spend.

Ideally, graphs should be limited to communicating one data point unless they are illustrating correlation. If you find yourself trying to communicate too many different ideas, consider creating a second graph. 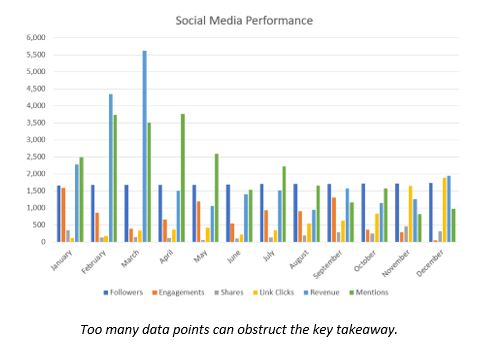 Always start at zero. It’s tempting to demonstrate huge gains to your audience. Or perhaps it just saves space to make the graph smaller and only highlight what’s necessary. Unfortunately these graphs are misleading.

For example, the two graphs below illustrate growth in Twitter followers. A quick glance at the first graph indicates that followers have more than doubled in the past year. But closer inspection of the vertical axis shows the scale doesn’t start at zero. Because of this, the first graph inflates the success of the past year and can cause decisions to be made based on inaccurate assumptions. The two graphs below communicate the same information, but one gives a clear picture of the incremental growth whereas the other seems to be indicating huge strides in performance. 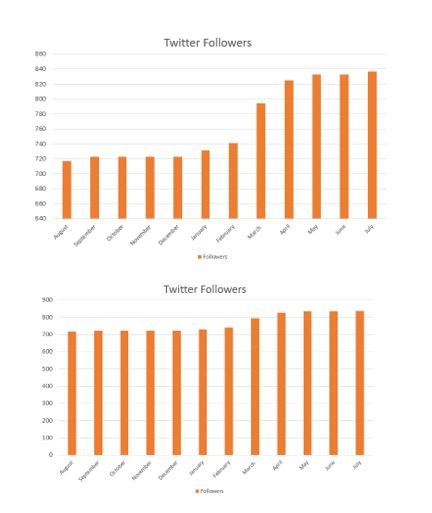 Scale applies to area as much as it does to the axis. Consider the graph below. Between 1999 and 2003, the number of Starbucks locations increased nearly three times. But in this visualization, the image representing the data point for 2003 has gotten both wider and taller, making it appear significantly larger than three times the size. While it’s true that we can reference the scale, that requires the audience to work for that insight, which is covered above as Mistake #1.

Pie charts are too often used as a visualization in the wrong context. We’ve all seen pie charts where the percentages don’t total up to 100, which can require the audience to do calculations to interpret the meaning.

It’s important to base the percentage on the total, and not leave off categories that seem unimportant. For example, in the chart below, it looks like California makes up over a third of sales. But the chart displays only the top five regions and doesn’t state how much of all sales the top five regions generate. The data reporting here overemphasizes California’s importance to the organization. 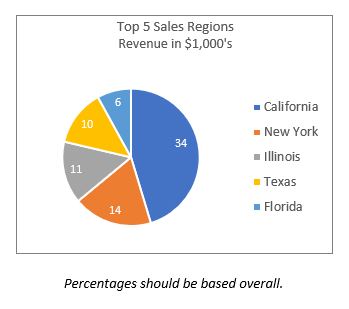 Data visualization can go a long way in illustrating the impact of marketing on company growth. Building brand awareness is no longer enough. Today, marketing departments are expected to directly contribute to growth by filling the new business pipeline and by converting leads into customers. Ability to interpret and present data is an important skillset for marketers. To learn more about ways in which marketing can contribute to growth, download our free Ultimate Growth Marketing Playbook . 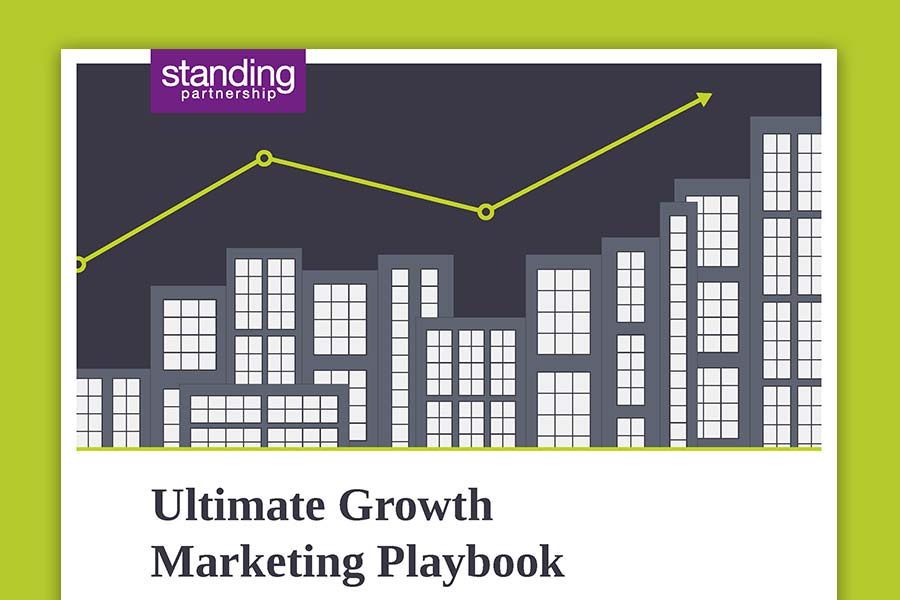 Nearly 70 percent of CEOs believe chief marketing officers should be leading revenue growth—is your department prepared for this challenge?

Why Your Search Strategy Differs from Your Brand Messaging

How to Run a Virtual Strategy Meeting